Nashville has become quite the movie hotspot. As a member of the Music City Film Critics, we were able to review the movie and have a q and a session with Jessica Chastain on this movie. It made for a fun night. My daughter is a huge Jessica Chastain fan and she loved that we were able to interview her and watch her movie (it’s her movie because she bought the rights to it years ago). Let’s see what I actually thought about this movie. 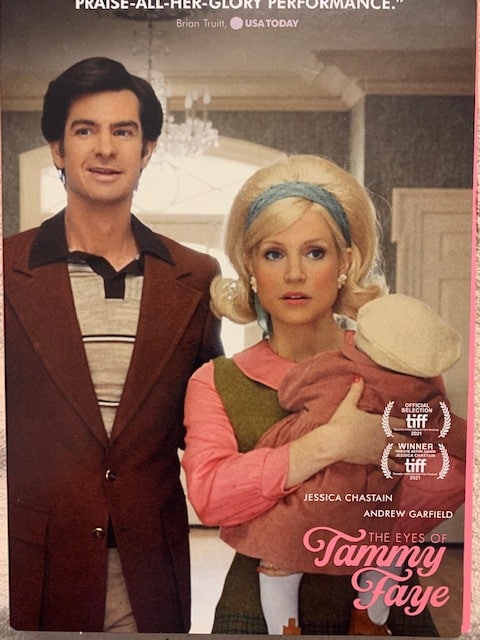 Now my review of The Eyes of Tammy Faye

I’m not going to lie I went into this movie not wanting to see it. I had bought into what the media sold us so many years ago about Tammy Faye Baker. But the movie has substance and it kept me interested and entertained the entire time. I ended up actually enjoying this movie. The true test to me is would I watch this movie again. I can honestly say that I would. Now there are some very grown-up subjects in this movie. So, can you watch it with kids? No. No, you cannot. There are some things kids shouldn’t see and there was more than one occasion that I was wanting to hide my teenager’s eyes. I came away thinking very differently about Tammy Faye then I did for years. I think that was the whole point for Jessica. That we didn’t truly understand what all actually happened to Tammy and what a beautiful soul she actually was. If you are like me and have no interest in seeing this movie, I say to give it a chance. You might just be surprised and what a good solid movie it actually was.  I give it 4 out of 5 stars!

How did you get involved with this project?

I saw the documentary in 2012 just knew I needed to know more about her, her life and everything. I was disappointed that I knew about how much mascara she wore instead of the Steve Peters interview. I was blown away about who she was and what I remembered from who she was. The media fed me a story that wasn’t accurate. I called my agent and manager about how to buy the rights to the doc and it was 7 years later we were on the set.

One of the reasons you wanted to tell her story was because of Steve’s story (pastor who is gay and HIV positive who is still alive). That scene is incredibly moving can you tell us about the experience of filming that scene.

To me that was the most important scene in the movie. There’s a video of it on YouTube because Steve’s caretaker took a video of it. I was incredibly nervous, because for me it was the reason why I wanted to make the film. Because in 1985 it was a radical act of love. The day of this being filmed was the day that Tammy’s daughter and grandchildren came to set. I wanted to wear a heart necklace because she wore it in the interview. I think she chose everything she wore and there’s a reason she wore a heart necklace in the interview. Her daughter was wearing the same necklace that Tammy wore in the interview that day. It was a special moment to meet her family and feel like maybe someone’s looking at us favorably.

Since we’re in Nashville, we have to talk about your singing!

Tammy Faye sang in such a way that she ministered through song. She would sing up to Jesus. There’s no variation in her tone. Her voice or her outfits are all larger than life. I have a complicated relationship with singing. I feel exposed by it. She was the exact opposite. I had to act. It did not come as easily to me. T Bone Burnett and I are working on Tammy and George project here in Nashville right now. This one was another 7 year project as well. We are ready to shoot.

Can you talk about the transformation from turning you into Tammy Faye? Was that a challenge for you?

When I did the first test, I had a bit of a panic attack. She laughs really easily; she cries really easily and she’s just a very open person. They put me in the chair and put prosthetics on my face. So,  then I had this barrier and I couldn’t feel the air on my skin. The only thing that was open was my eyes and my voice. I felt restrained, in a sense, and I had to push through it. For me the make up, the prosthetics were all a part of it. I had to find my way through it so I could express myself. I had to go beyond what that was and use my voice in a different way. Even her shoulders, how she smiles. I had to find my way through it all to be able to portray her authentically.

What did you learn about yourself playing this character?

The scene where she goes up to the teenage boys who were making fun of her and… And that really happened by the way and that had to be in the film. She understood that meanness and aggression comes from pain. So, even if they were being cruel to her she went toward it to heal it with love rather than run away. It’s something that I aspire to do rather than just arm up and walk away. Go towards it. The only way it’s solved is through love and understanding. It’s something I aspire to do.

It felt like you could have vilified a lot of people in this movie, and you didn’t. It took real effort not to. Can you talk about that?

There was a lot of questions are we going to show what happened in Florida? But I felt like the media had covered all of that. I felt like this was from her POV and she wouldn’t cover it in her story. When the scandal happened Sissy had a record contract and that was cancelled. I felt that this story,  it had to be told in an uncynical and healing way.

What aspect of Tammy are you taking with you?

I get embarrassed really easy. I don’t like it when people sing happy birthday. When I signed on to do this my whole body started shaking. I just realized that it was coming from a sense of self-doubt and here she is she knew people were going to make fun of her and she just did it anyway. So, I did the first take and did a prayer myself because I needed to go beyond what I was comfortable with. I take with me throwing myself into situations that make me uncomfortable. If I get to do this for a living, then that is what I should be doing.

and on Blu-ray™ and DVD November 16 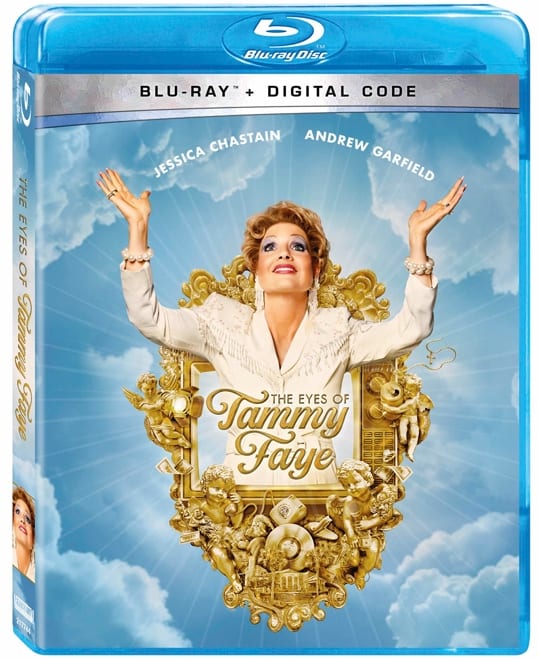 LOS ANGELES, CA (October 5, 2021) – Searchlight Pictures’ transcendent biopic The Eyes of Tammy Faye starring Jessica Chastain and Andrew Garfield tells the incredible true story of an icon. Praised by critics for its captivating performances, the film will be available on Digital November 2 and on Blu-ray and DVD November 16.

The Eyes of Tammy Faye is an intimate look at the extraordinary rise, fall and redemption of televangelist Tammy Faye Bakker (Jessica Chastain). In the 1970s and ’80s, Tammy Faye and Jim Bakker (Andrew Garfield) built a burgeoning religious broadcasting network and theme park – until rivals, financial wrongdoing and scandal toppled their empire.