1 Shares
Share
Tweet
Pin1
Share
Share
I actually took time out of my crazy busy schedule to watch this movie this weekend. I really enjoyed it. The music was fantastic and the message was good too. If you’ve not seen it yet you’re going to want to. If you have seen it you’re going to want to own it! Let’s see what the movie’s about and then enter to win a digital download over at MoviesAnywhere.com or download the app and watch them there! 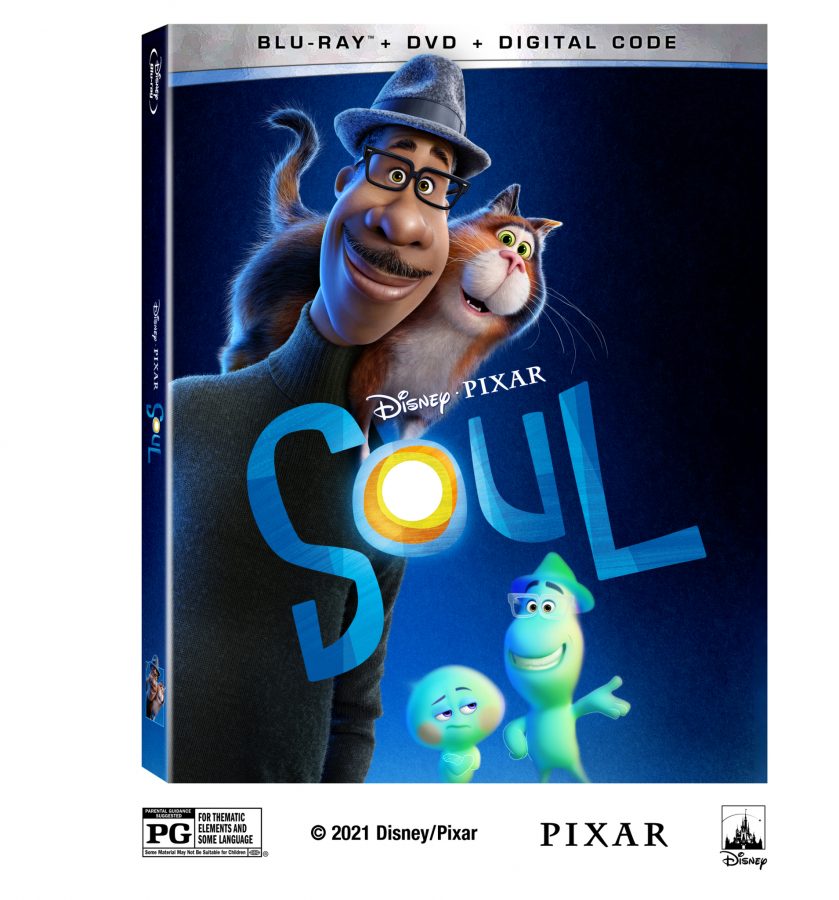 Soul is directed by Academy Award® winner Pete Docter (Inside Out, Up), co-directed by Kemp Powers (One Night in Miami) and produced by Academy Award nominee Dana Murray, p.g.a. (Pixar short Lou), Disney and Pixar’s Soulwill be available on digital, 4K Ultra HD™, Blu-ray™ and DVD on March 23.The digital and physical releases of Soulwill include exclusive, never-before-seen deleted scenes andaudio commentary by Pete Docter, Kemp Powers and Dana Murray. Additionally, fans can find the film packaged as a collectible SteelBook®at Best Buy and packaged with a limited-edition gallery book at Target.Honored as a recipient of the American Film Institute’s Movie of the Year Award andwinner of theNational Board of Review’s Best Animated Featurein addition to being included on its Top Films list, Soulis “an animated film fit for all ages,” (Jazzie Belle, Vibe.com) loved by critics and audiences alike. Certified-Fresh on Rotten Tomatoes™, add Soul to your Disneyand Pixar collection on Movies Anywhere and buy it on 4K Ultra HD™, Blu-ray™ and DVD on March 23.
Disney and Pixar’s Soul Bonus Features*
•Deleted Scenes oIntroduction–Writer Mike Jones and story supervisor Kristen Lester introduce the Souldeleted scenes.oMentorOrientation–Joe sneaks into the You Seminar Mentor Program orientation, trying to figure out how on earth he can get back to…Earth.oClubhouse Forgery–Joe follows 22 into her “secret lair” as she reluctantly agrees to help him find his way back to Earth.oHome Lessons–Stuck inside Joe’s body, 22 clumsily attempts to help the downstairs neighbor.oLiving the Dream–Joe has a heart-to-heart with 22 about her fear of living on Earth, then tries to make his way back home via a dream portal.oPress Shot–Joe, stuck in a cat’s body, and 22, stuck in Joe’s body, take the subway to the jazz club for a publicity photography session.
•Audio Commentary –View the film with audio commentary by director Pete Docter, co-director/writer Kemp Powers and producer Dana Murray.•Not Your Average Joe–See the thought and care that went into crafting Joe and his story in Pixar’s first film to feature a Black leading character.•Astral Taffy–Get an in-depth look at the artistry and technical innovation that went into creating the sets and characters of Soul’s world.•Pretty Deep for a Cartoon–The filmmakers tackle big questions, such as: Where does a newborn’s personality come from? What’s the meaning of life? And more!
*Into the Zone: The Music and Sound of Soul–Explore the movie’s different sonic worlds and discover how music drives and adds specificity to Joe’s journey.•Soul, Improvised–See how the Pixar Systems team and Soul’s crew managed to finish the film on schedule during the height of the COVID-19 pandemic.•Jazz Greats–Giants of the jazz world who consulted on Soulshare their passion and hard-won wisdom about what music is and does for us all.*bonus features may vary by retailerand productSynopsis:Jamie Foxx leads an all-star cast in this hilarious, heart-filled adventure. Disney and Pixar’s SoulintroducesJoe, who lands the gig of his life at the best jazz club in town. But one misstep lands Joe in a fantastical place: The Great Before. There, he teams up with soul 22 (Tina Fey), and together they find the answers to some of life’s biggest questions.Voice Cast:Jamie Foxxas the voice of Joe Gardner Tina Feyas the voice of 22 Phylicia Rashadas the voice of Libba Ahmir “Questlove” Thompson as the voice of Curley Angela Bassett as the voice of Dorothea Daveed Diggsas the voice of Paul Graham Nortonas the voice of Moonwind
Rachel House as the voice of Terry Alice Bragaas the voice of Counselor Jerry Richard Ayoadeas the voice of Counselor JerryWes Studias the voice of CounselorJerryFortune Feimsteras the voice of CounselorJerryZenobia Shroffas the voice of CounselorJerryDonnell Rawlingsas the voice of DezJune Squibbas the voice of GerelDirector:Pete DocterCo-Director:Kemp PowersProducer: Dana Murray, p.g.a.Executive Producers:Dan ScanlonKiri HartStory and Screenplayby:Pete DocterKemp PowersMike JonesOriginal Scoreby:Trent Reznorand Atticus RossJazz Compositions and Arrangements by:Jon BatisteDisney and Pixar’s Soul Product SpecificationsStreet Date:March 23, 2021Product SKUs:Digital:4K UHD, HD, SDPhysical:4K Ultra HD™Combo Pack (4K UHD™ +Blu-ray™Feature+Digital Code), Multi-Screen Edition (Blu-ray™Feature+DVD+Digital Code) & DVDFeature Run Time:100 minutesRating:U.S. Rated PGBonus material not ratedAspect Ratio:Digital:2.39Physical:2.39:1U.S. Audio:4K Ultra HD™:English Dolby Atmos and 2.0 Descriptive Audio, English and Spanish 7.1 Dolby Digital PlusBlu-ray™:English 7.1 DTS-HDMA and 2.0 Descriptive Audio, Spanish 5.1 Dolby DigitalDVD:English and Spanish 5.1 Dolby Digital, English 2.0 Descriptive Audio
Digital:English Dolby Atmos (UHD only), English 5.1 & 2.0 Dolby Digital, Spanish 5.1 & 2.0 Dolby Digital, French 5.1 & 2.0 Dolby Digital, English Descriptive Audio 2.0 Dolby DigitalCA Audio:4K Ultra HD™:English Dolby Atmos and 2.0 Descriptive Audio, English and French 7.1 Dolby Digital PlusBlu-ray™:English 7.1 DTS-HDMA and 2.0 Descriptive Audio, French 5.1 Dolby DigitalDVD:English and French 5.1 Dolby Digital, English 2.0 Descriptive AudioDigital:English Dolby Atmos (UHD only), English 5.1 & 2.0 Dolby Digital, Spanish 5.1 & 2.0 Dolby Digital, French 5.1 & 2.0 Dolby Digital, English Descriptive Audio 2.0 Dolby DigitalU.S. Subtitles:4K Ultra HD™:English SDH and SpanishBlu-ray™:English SDH and SpanishDVD:English SDH and SpanishDigital:English SDH, French, SpanishCA Subtitles:4K Ultra HD™:English SDH and FrenchBlu-ray™:English SDH and FrenchDVD:English SDH and FrenchDigital:English SDH and FrenchMedia InquiriesChris BessDorothy BalloweT: 424-446-7096T: 424-446-7094E: [email protected]: [email protected] product HEREPress materials available at EPK.TVVisit www.disneymovieinsiders.com/movie/soul-2020Social MediaTwitter:@PixarSoulFacebook:@PixarSoulInstagram:@PixarSoul#PixarSoulAbout Pixar Animation StudiosPixar Animation Studios, a wholly owned subsidiary of The Walt Disney Company, is an Academy Award®-winning film studio with world-renowned technical, creative and production capabilities in the art of computer animation. The Northern California studio has created some of the most successful and beloved animated films of all time, including “Toy Story,” “Monsters, Inc.,” “Cars,” “The Incredibles,” “Ratatouille,” “WALL•E,” “Up,” “Toy Story 3,” “Brave,” “Inside Out,” and “Coco.” Its movies have won 37 Academy Awards® and have grossed more than $14 billion at the worldwide box office. “Soul,” Pixar’s 23rd feature, is currently streaming on Disney+.

Now go ahead and enter to win the digital copy of Soul below.

Disclosure: Giveaway ends 3/31/21 at 11:59pm. We reserve the right to make revisions, to cancel, or suspend this contest for any reason. We are not associated with any of the companies named above. The odds of winning are based on the number of entries received Open to the US 18+ only. Confirmed Winner(s) (by Rafflecopter) will be contacted by email. Winner(s) have 48 hours to respond before a new winner is chosen. No purchase necessary. Void where prohibited by law. The sponsor(s) will be responsible for product shipment to winner(s) of this giveaway. My UnEntitled Life (and any other blog participating) is not responsible for product shipment/delivery. This event is in no way administered, sponsored, or endorsed by, or associated with, Facebook and/or Twitter, Google, Pinterest. This disclosure is done in accordance with the Federal Trade Commission 10 CFR, Part 255 Guides Concerning the Use of Endorsements. Entrants must only enter with either one email address, IP address and/or Facebook account, anyone found violating these rules will be disqualified. It is at the sole discretion of the admin of the giveaway if the winner has met the rules or not.

Before you go check out the time I went and visited Pixar headquarters and learned all about it! Also check out how shorts are made at Pixar!  Then be sure to follow me on facebook, pinterest and instagram!