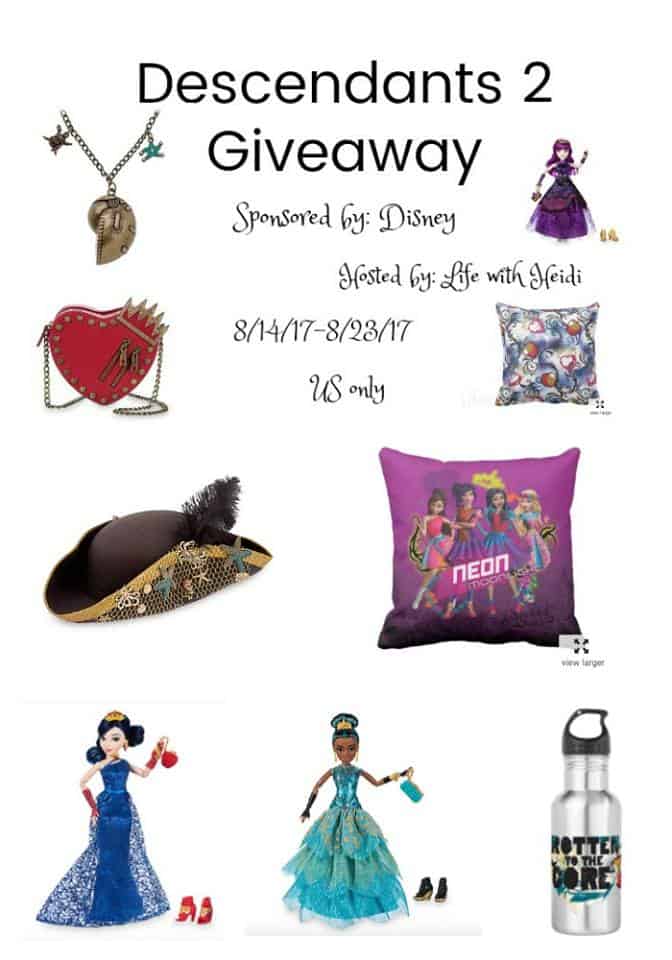 Carlos and Jay (also known as Villain Kids or VKs) — try to find their place in idyllic Auradon.
When the pressure to be royally perfect becomes too much for Mal, she returns to her rotten roots on the Isle of the Lost where her archenemy Uma, the daughter of Ursula, has taken her spot as self-proclaimed queen of the run-down town. Uma, still resentful over not being selected by Ben to go to Auradon Prep with the other Villain Kids, stirs her pirate gang including Captain Hook’s son Harry and Gaston’s son Gil, to break the barrier between the Isle of the Lost and Auradon, and unleash all the villains imprisoned on the Isle, once and for all. To read more about it, check out Heidi’s post over at Life with Heidi.
Cast Secrets 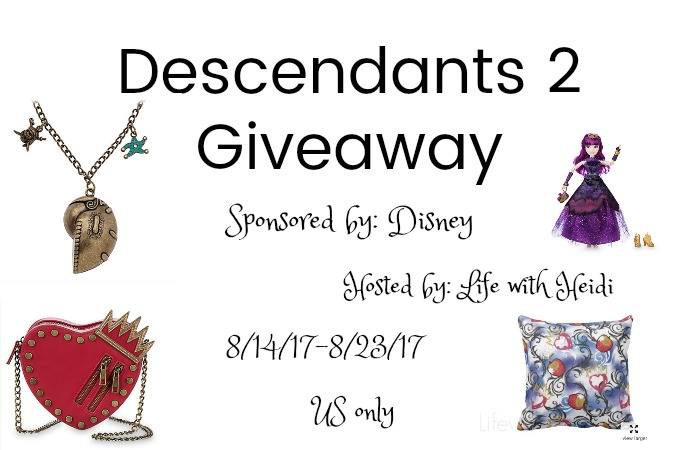 
Prizing and samples courtesy of Disney

Giveaway Details:
This giveaway will run from 8/14-8/23 12:00 am est.
Open to US Only and you must be 18 years or older to enter.
We reserve the right to make revisions, to cancel, or suspend this contest for any reason. We are not associated with any of the companies named above. The odds of winning are based on the number of entries received Open to the US 18+ only. Confirmed Winner(s) will be contacted by email. Winner(s) have 24 hours to respond before a new winner is chosen. No purchase necessary. Void where prohibited by law. The sponsor(s) will be responsible for product shipment to winner(s) of this giveaway. Life with Heidi (and any other blog participating) is not responsible for product shipment/delivery. This event is in no way administered, sponsored, or endorsed by, or associated with, Facebook and/or Twitter, Google, Pinterest. This disclosure is done in accordance with the Federal Trade Commission 10 CFR, Part 255 Guides Concerning the Use of Endorsements. Entrants must only enter with either one email address, IP address and/or Facebook account, anyone found violating these rules will be disqualified. It is at the sole discretion of the admin of the giveaway if the winner has met the rules or not.
Please email me at [email protected] with any questions or concerns.
90 Shares
Share2
Tweet82
Pin6
Share
Share
Previous Post: « Duck Duck Goose trailer and release date
Next Post: Summer Fun, Food and crafts projects round up! »