I was given the product or compensation to facilitate the writing of this review. It did not affect my honest opinion of it. 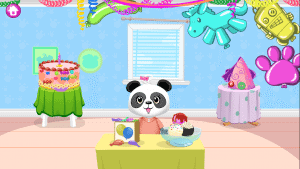 Lola’s ABC Party app is a great game for the preschool and kindergarten or 1st grade set. It gives the player fun games to play while they are waiting to have a party. Here’s what happens. Lola introduces everyone to the game and tells them they are preparing for a party. So then they make party hats. After the hats are made they get to play ABC games.  Then they make balloons. Then another game. Then they make the cake and then another game. I thought it was genius the way that they let you make things and then you learn by playing one of their ABC games.

The games are making words, playing memory, drawing letters and matching the letter to its sound.  It would be such a great teaching tool for the younger elementary/preschool set.  You can see above that is my party ready to go and completely decorated. I made a cake, decorated hats, made balloons and then made my ice cream for the party. This is what I got to see once I had finished the game. They even had guests arrive that played guitar and danced. It was so cute. The graphics are crisp and clear and that made the game so enjoyable.

Here’s where I had practice drawing the letter game.  I took this while I was playing it. 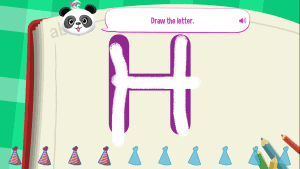 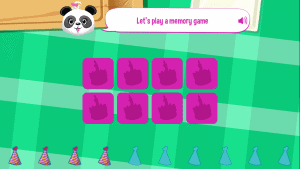 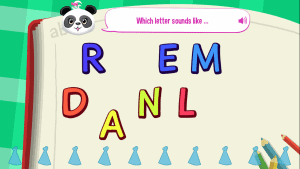 The game is a lot of fun and I can see young children enjoying it for hours. In all, it’s a great game to introduce children to letter sounds, making words, memory and learning on an iphone or ipad. Your child will have a great time learning while playing this great game for children.  Here’s some ways to get in touch with and follow the Lola Panda family.  Lola’s ABC Party will be ready to purchase on July 3rd in the itunes app store.